has been serving quality vegan food in Laguna Beach, California
for over 40 years!

The Stand Natural Foods Restaurant was established in 1975 and will live on for generations to come by maintaining their 100% vegan menu that our customers have grown to appreciate and love.  The Stand's longtime owner, Edward purchased the Stand in 1975 from the family that created Have'A Chips™.  He has always believed that the healthiest food you can put in your body should consist of a plant based 100% cruelty free vegan diet.

As Edward thought about retirement he carefully considered several worthy replacements who he would allow to take over The Stand.  A key component in his evaluation process was a strong desire for The Stand to maintain its integrity and original charm.  He found the perfect fit with new owner and former employee, Alizabeth "Alisa" Arciniaga, daughter of former local Laguna Beach Artist, Alfredo Arciniaga.  Alizabeth began working at The Stand in 1979 after her father suggested she try and get a job at The Stand in order to have enough money to attend the Sadie Hawkins dance at Laguna Beach High School.   She purchased a used vintage bicycle from the Laguna Beach Cyclery next door, to The Stand, for $15 to act as her main mode of transportation between home, school and work.   After working at The Stand for a couple of years, she had enough money to buy her dream car, a fully restored 1966 VW Bug for $2,100.  Alizabeth has always been a faithful customer of The Stand even after her employment there ended.

After relocating back to Orange County in the summer of 2012, Alizabeth and her daughter, Aarica, were dining at The Stand when she overheard a conversation between a father and a young son.   The boy asked his father, "Dad, how long have you been coming to The Stand?"  The father replied, "Since the 70's before you were born." The son exclaimed, "When I grow up, I'm going to bring my kids here too!"  It was at that moment, in which Alizabeth had an epiphany that The Stand needed to be here for as long as possible so her posterity could enjoy The Stand's 100% vegan food as well.  She approached Edward that summer and asked him to put her on the list of potential buyers, if he ever decided to retire.

As the new owner, it is of vital importance to Alizabeth that she maintains the integrity of the vegan menu.  Edward's original tried and true recipes will remain and Alizabeth has brought  back some of his original baked goods recipes from the late 1970's that she knew and loved; such as his heavenly carrot cake!   The employees have embraced the change of ownership and love the enthusiastic positive energy Alizabeth brings­ to their place of employment, just like Edward always did.  Part of the essence of The Stand is that no matter what day, month or year, you visit; you will always get the feeling that time has stood still. Just take a glance at the front reading table, where you will find LIFE magazines from the 60's & 70's.  The Stand still is and always will be, just as you remember and love from your very first visit, whether that was in 1975, 1985, 1995 or yesterday. 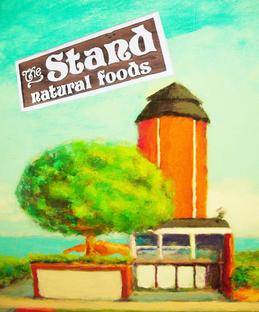